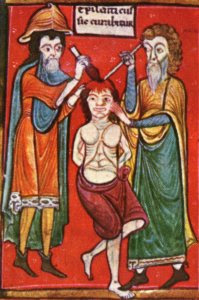 The surgical treatment of epilepsy is not a recent innovation. As early as ancient Greek and Roman times, and in the Middle Ages, trepanation (the opening of the skull) was occasionally carried out on people with epilepsy. There were many different reasons for doing this, however. There was seldom a rational, medical reason for the operation, for instance to raise a piece of the skull cap which had entered the inner part of the skull as a result of an injury, perhaps in war, and which was thought to cause epileptic seizures in the patient. In such a case, the surgeon tried to raise the piece of bone and thus remove the cause of the epilepsy. Mostly, however, there were mystical, superstitious reasons for the trepanation operations which were performed. It was thought that opening the skull cap would cause the demons of the sickness, poisonous gases or disease-causing juices to escape. The practice of cauterisation was based on the same beliefs. In this picture, the person with epilepsy ('epilepticus') is undergoing both procedures - trepanation and cauterisation - at the same time.
Epilepticus sic curabitur ('The way to cure an epileptic') Sloane Manuscript, collection of medical manuscripts, end of the 12th century - British Museum, London

Pericardial pathology 900 years ago: A study and translations from an Arabic medical textbook

Phrenology (from Greek: φρήν, phrēn, "mind"; and λόγος, logos, "knowledge") is a defunct field of study, once considered a science, by which the personality traits of a person were determined by "reading" bumps and fissures in the skull. Developed by German physician Franz Joseph Gall around 1800, the discipline was very popular in the 19th century. In 1843, François Magendie referred to phrenology as "a pseudo-science of the present day."[1] Phrenological thinking was, however, influential in 19th-century psychiatry and modern neuroscience.[2]

This is an advertisement for Day, Son and Hewitt’s medicine for animals, specifically farm animals such as horses, cattle, calves, sheep and lambs. Up until the late 18th century the farrier was the major figure in animal medicine. Farriers had knowledge of equine diseases, remedies and treatments. In 1791 the Veterinary College was set up in response to the demand for a better understanding of animal diseases. As knowledge and expertise grew animals were given better care and a range of medicines and treatments were developed. Day, Son and Hewitt are still making animal medicines today.

This is an advertisement for ‘Mrs Winslow’s Soothing Syrup’, this medicine was given to babies to soothe them when they were teething. It softened gums and reduced inflammation and was widely used. One problem was that it actually contained Opium. During the 19th century Opium was frequently used, poets such as Byron and Shelly indulged in ‘laudanum’, an alcoholic drink containing opium and medicines such as ‘Mrs Winslow’s Soothing Syrup’ were used to treat every sort of illness from colds to heart disease. The addictive properties of Opium were eventually recognised and it was banned, except for use in medicine.

Evanion Collection of Ephemera
This is an advertisement for Dr Jacob Townsend's sarsaparilla medicine. During the 19th century medicines such as this, were taken for all manner of aliments from arthritis and skin disease to psoriasis and leprosy. It was actually widely used in China as a treatment for syphilis. It was also taken by women to improve their chances of becoming pregnant. 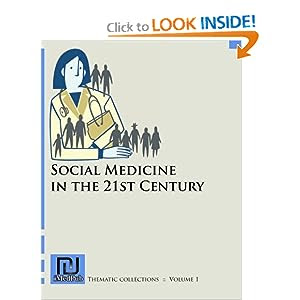